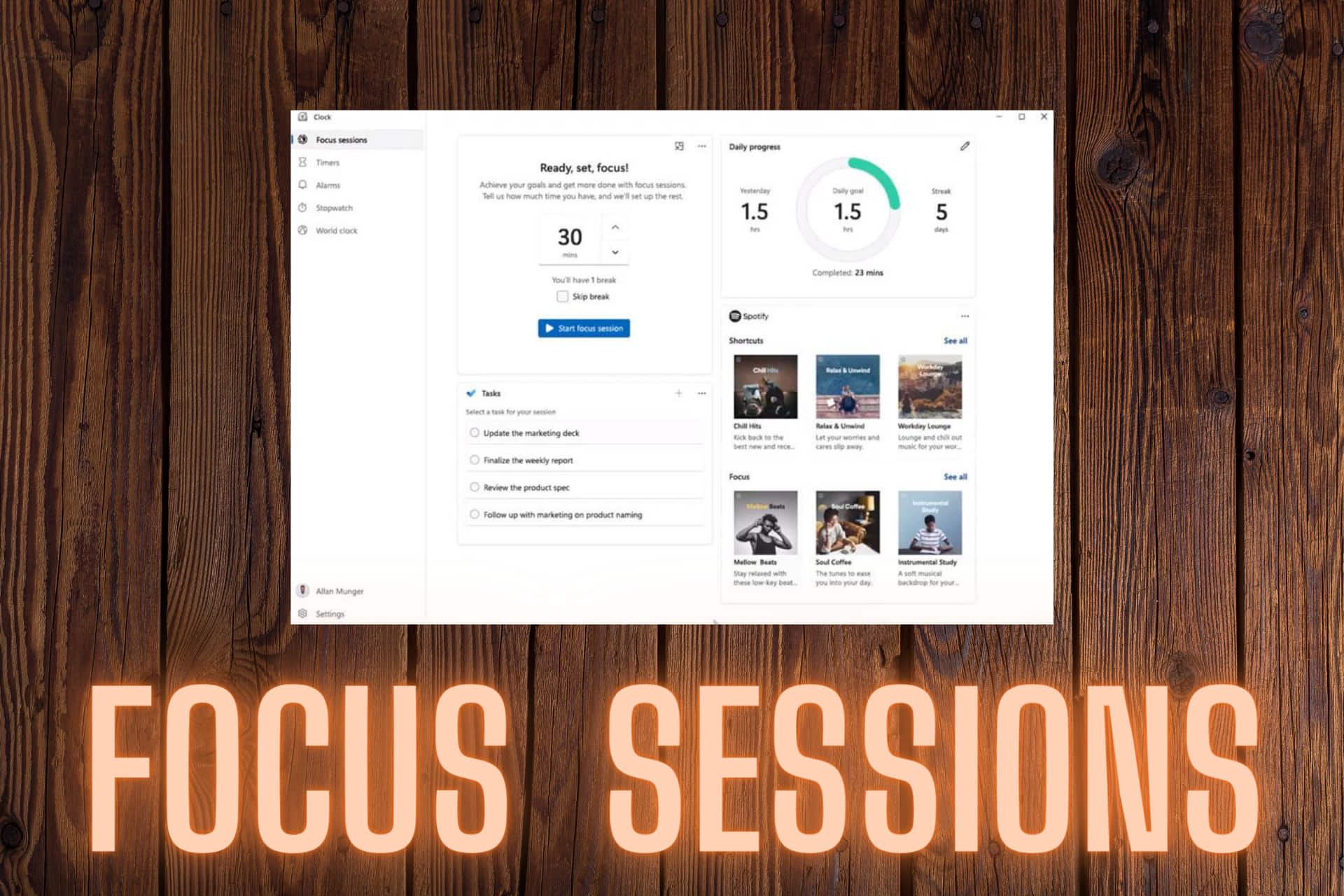 After posting the information about the new Snipping Tool, just yesterday, today, Microsoft’s Panos Panay introduced something called Focus Sessions. And although this was only a brief teaser, the feature looks pretty interesting.

It seems that we are getting more and more features on the upcoming operating system and Microsoft officials are eager to share this info with their community.

Focus Sessions is coming to Windows 11

Focus Sessions has a Microsoft To-Do integration, so you can pick a task from your to-do list and start work on it.

You can also set how long you want the current work session to be. And since there’s Spotify integration, you can pick music that you want to play during your Focus Session. Pretty neat, right?

There are some other dashboards as well, like the one that tells you how many breaks you have, and one that shows progress for tasks and goals.

As you might have already guessed, what’s in the short video is all we know right now. The specifics and all the inner workings of the feature are unknown, but it looks really promising.

Also, judging by the way Microsoft presented this new feature, and the movie-like trailer music in the presentation video, they’re expecting it to be an absolute smash.

The even bigger question on everyone’s minds right now is: When will it be introduced?

However, many feel that there’s a narrow window where new features such as Focus Sessions can still be squeezed into Windows 11 before it has to be polished for release, towards the end of the year.

Because, just in case you forgot, the community is still waiting on Android app support and other features that were announced prior to Focus Sessions.

But surely Microsoft wouldn’t have made such promises if they absolutely knew that they couldn’t deliver so we might as well just get ready to embrace another wave of incoming changes as well.

There’s no telling just where this roller coaster will make its next stop, but the future seems pretty promising for the upcoming OS.

It really feels like the tech company is focusing a lot more of its resources to make Windows 11 be an essential tool for user and enterprise productivity, considering all the Teams new features, and this new Focus Sessions idea.

What’s your opinion on Microsoft’s new Focus Sessions idea? Let us know in the comments section below.

Asus reveals pricing and availability for its folding-display l

The Samsung Odyssey OLED G8 is a sumptuous new ultrawide

It's not the biggest box office opening by any stretch, but it is a record. Sonic the Hedgehog now holds the record for best...

Transfer contacts and data from iPhone

Intel’s Arc Alchemist GPUs are getting closer to launch

Xiaomi Says 80 Percent of Supply Chain Operational Ahead of 5G...

The Sports Gambling Gold Rush Is Absolutely Off the Charts

3 Proven Strategies for Growing Your Network